say scientists who’ve found that lab mice get smarter and more agile as they age when fed a mix of nutritional supplements.

The diet and supplement plan isn’t a conventional “cure.” But the animal results at McMaster University in Hamilton, Ont., illustrate how investigators aim to slow down the aging process to avoid the physical and mental declines that often come as more candles are added to the birthday cake.

At Prof. David Rollo’s biology laboratory, mice that ate bagel bits soaked in a cocktail of supplements such as B vitamins, vitamin D, ginseng and garlic lived longer than those not taking the special mice chow.

“If you put them on a supplement, they actually learn better as they age,” Rollo said. “They still don’t live much longer but their brain function is remarkable.”

The mice also acted like restless teenagers showing “spontaneous motor function” that fades in humans in a universal sign of aging, Rollo added.

The supplemented mice maintained their memory function in tests, such as remembering a familiar object. Their learning abilities were like those of very young mice, he said. Mice of the same age that were not supplemented behaved in lab tests like a frail 80-year-old woman.

Investigators turned to the cocktail of ingredients based on their suspected ability to offset five key mechanisms involved in aging.

The researchers have also doubled the lifespan of crickets using a combination of dietary restriction and supplements, and other investigators have found similar results in other animal models.

Most of the supplements Rollo and his team use are sold at health food stores. But he cautioned they are not something to be toyed with because the cocktail hasn’t been tested to see if it is safe for people.

The supplements cross the blood-brain barrier to affect the mitochondria “furnaces” in the brain in a fundamental way, he noted.

Scientists still don’t how the supplements actually work and interact in the body.

Like Rollo, British gerontologist Aubrey de Grey of Cambridge is optimistic about the potential to extend human life span, but he takes a different approach. He’s not trying to eliminate aging but to extend how long people can be fit and healthy.

“We know that with simple man-made machines like cars and airplanes, we don’t have a limit,” said de Grey said, who acknowledged that humans are more complicated. 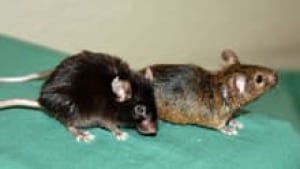 These mice are the same age but one received the supplements and one didn’t. (Courtesy of David Rollo)

“We can keep these machines going … just by doing sufficiently comprehensive repair and maintenance reasonably often and that is going to be exactly the same for the human body.”

By bringing the molecular and cellular damage that accumulates throughout life under medical control, de Grey suspects that human life spans could be vastly extended.

As we age, brain and heart cells wear out and can’t be replaced. Arteries and joints can become clogged and defects can develop.

At de Grey’s lab, researchers are studying how to use bacterial enzymes to clean up the cellular byproducts that accumulate in the body as waste. Other ideas include using stem cells to regrow worn-out parts and gene therapies to protect DNA from mutations.

“If you reach age 26, what is the chance of not reaching 27? The answer is less than one in a thousand. So if you maintain that risk then clearly you [can] live a four-digit lifespan. You will live 1,000 years or more.”

Earl Fee of Mississauga, Ont., has a more modest goal: to live to 120. Click Here to Watch his story

Fee was a runner in his youth and then stopped for years. He resumed running at the age of 57 and now competes.

Earl credited his intense training regime, healthy diet, enjoying a glass or two of red wine before dinner and the fortune of good genes for his vitality.

“Before I ran, I wasn’t as energetic or as vibrant,” he recalled.